Working with the Flow of the Moon 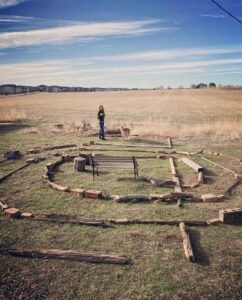 The moon moved into Aries this morning at 1:36am MST, about an hour after Mercury went retro. I’m up super early and thinking about all the things I could be doing, and at the same time wondering if I should go back to sleep. That might be the epitome of Aries and Mercury energy for me right now. I have Jupiter in Aries in my second house. Initiated things come together if I put action to them. And when that initiation seems inspired, it practically rolls out by itself. I’m just the conduit so-to-speak. Ritual is important in my life when it comes to making structure. It seems too that when I’m self-motivated, that’s when I see things come into fruition.

April 1st, April Fool’s Day this year, I built a labyrinth (the Cho Ku Rei, the Reiki power symbol) in the back yard. I felt like the new moon being in Aries that day was powerful and important in that creation. I was suddenly inspired and hardly had the idea before gathering bricks and branches and moving them into formation. It seemed inspired, like I was on autopilot. I don’t know how long it took, or when I started, I just knew when it was complete. My body came to stillness, and it was done. Building it was a meditation. It’s been the place I go every morning since, walking the labyrinth when the sun comes up… unless it snows all night, like last night—on the days I can’t walk it, I miss it. 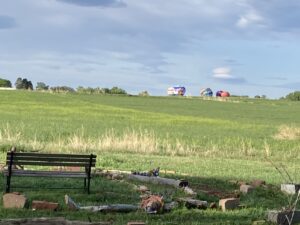 It’s configured in the feminine spiral, so it goes down into the earth where I’ve set the Violet Flame. Past energy and old will left in this vortex goes right down to the center of the earth into the Violet Flame to be transmuted. I think it’s been the most healing ritual for me to date. In the summer the hot air balloons float above the fields behind the house and over the Cho Ku Rei. I wonder about how the vortex feels from up there.

The Fool’s journey, April Fool’s Day, wasn’t lying. I’ve been thinking a lot about quantum tunneling lately. It’s like remote viewing, but creating energetic pathways to the places you’re seeing. It happens when you’re aware of it, and when you’re not. Sitting in the Cho Ku Rei, so many pathways have opened, seemingly to different worlds. Getting grounded, centered, and neutral, doors open, movement begins, and suddenly I find myself in the Elbrus volcano with giants and Greek gods. Though it’s considered dormant, it seems to have lots of activity. Being part of something so far away physically, having this awareness of it, changed how I view 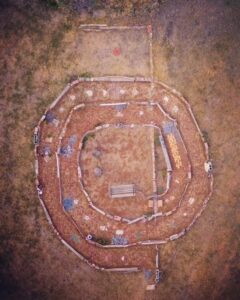 existence. Many don’t believe it this way, but I feel we are freer than we realize. I see we have more autonomy and interdimentional dexterity than anyone ever taught me growing up.

I feel like today with fiery Aries and reflective Mercury Retro energy, it may be time to resurrect some unfinished projects and plans and do a bit of recon. What wants to come through me? What wants to be created? What momentum is there for creation when it’s ready to light into action? It seems like today’s energy is about contemplation. It even looks like opening dusty books and having epiphanies about long-ago times. Maybe even lifetimes ago.