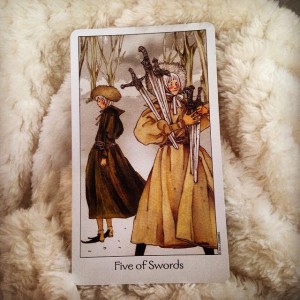 5 of Swords—Padmes Card of the Day

An event or actions of an ambitious-to-a-fault jealous someone can be a bolder on your path if you don’t hold your space. You can fight or lay down your sword and live to fight another day. This is a day to remember, “You gotta know when to hold’em. Know when to fold’em. Know when to walk away. Know when to run.” It’s up to you, but this can be over now, or affect you for months to come. Your being right doesn’t need to be proven. #tarot <3 www.padmes.com

Knights are about action. And what kind of action depends upon their suit. Knights are also court cards that can represent a person in the life of the seeker, if not the seeker himself. The Knight of Swords represents a young man or a man who acts young or, even though mentally strong, a bit naive because of lack of experience, and holds the energy of air signs (Gemini, Libra, Aquarius). He can also be an even younger man with mental know and abilities beyond his years.

Up:
Straight up the Knight of Swords doesn’t have “defeat” in his vocabulary. This card represents action rather than sitting around a round table (sewing circle) and talking the situation to death. It comes from a mental view (as swords are about cerebral energy). This Knight can indicate a surgical procedure when the surroundings cards are right, courage, bravery, and conflict whether inner or environmental. It also represents a man who demands respect through his energy. A young leader. This card, as a personality in the seekers life, can encourage or inspire the seeker to act on his or her own beliefs and have the courage to stand up for what they believe.

Reversed:
While right-side-up this man may demand respect with his energy, up-side-down he craves it and demands it verbally, though he may not be looked upon with the respect that is needed for his wishes. He doesn’t follow through with his word, changes his mind, can be or be seen as fickle. He can also give off the impression of being someone who stirs up trouble. He’s pushy and doesn’t look out for others best interests. And, unlike the Five of Swords, it’s obvious. The seeker usually knows who this card represents in their life when his characteristics are explained. He is a thorn in their side somehow that is depicted by surrounding cards. His judgment is off because he’s letting the emotions of drama get in the way of objective decision. A pushy know-it-all that would be best avoided.